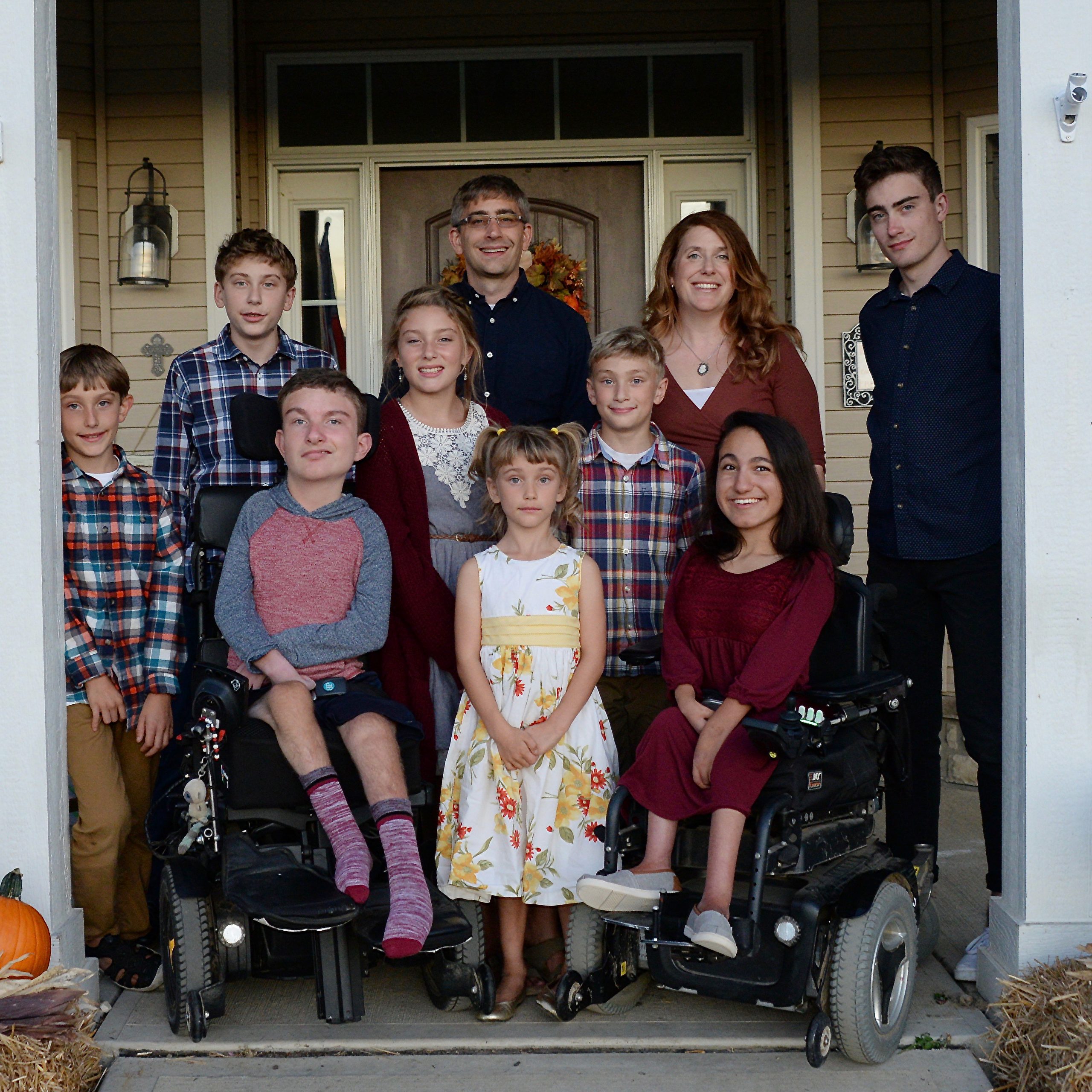 We didn’t expect for it to end up this way. Twenty-two years, eight children, and a life lived so deeply that the everyday beauty and suffering of it is at times both blinding and brilliant. We met as college sweethearts. I knew from the moment we met that this was the man God had saved for me to love and be loved by. We planned on two children, maybe three. We moved back home after the birth of our first son. Our second arrived two years later and then our third was on the way about eighteen months after that. Everything about that third pregnancy felt different. We were sure the baby was a girl and, not having any concerns previously, there was no need for extra scans. I went into labor four weeks early and no one was concerned. The doctor said, “come on in, it’s a great day to have a baby!” We knew the baby was breech so we were prepared for another C-section.

The moment the room changed, I knew something was wrong. I could feel it. “Boy or girl?” I kept asking. My husband sunk to the floor and a nurse put a wet towel across his forehead. I remember laughing, thinking two births and now this is going to make you squeamish? “I’m sorry. I’m so very sorry,” were the first words spoken to me by the doctor. We were told our baby was paralyzed. His legs twisted behind his neck and his spine folded where his ear was touching his hip. He had no movement. Teams of doctors and nurses rushed in. He needed to be transported. Before they left, I remember asking one more time, “Boy or girl?” We gave birth to a son.

Our son was born with a rare neuromuscular condition, arthrogryposis, which causes contractures of the joints and atrophy of the muscles. Thirteen years later and after thirty-seven surgeries and procedures across many state borders, we have just finished his last surgery. He now sits up straight in his power wheelchair, functions as a typical thirteen-year-old young man who just needs help with some daily tasks. When Gabriel was born, I remember worrying about my older boys and a wise friend counseled me, They will be better men for it.” And indeed they are.

During those thirteen years, the Lord blessed us with twin girls, one of whom is in heaven and one who sits by my side as I type this essay. Then came my Joseph who was born right before we moved out of state for Gabriel’s care. I received a call from a friend just a couple of weeks after we had moved. She said, I know you have much going on right now, but a mutual friend is adopting a little boy from one of Mother Teresa’s homes in Armenia and there is an eight-year-old girl there who has arthrogryposis. Would you consider adopting her? In all humility, I just had a baby, moved and was walking into another surgery. Adopting another child with special needs was not on my radar! I remember thinking, “what kind of friend are you?”  But I promised I would take it to my husband and we would pray. My husband immediately opened his heart and reminded me of our promise to the Lord that should another child like Gabriel come across our door, we would be open because we knew now how to help. Two years later, (and 2 more children later,) Elizabeth joined our family. Our last pregnancy was very high risk and we were able to move back to Columbus to give birth to our daughter. With my life, our baby’s life, and an adopted child who was due to come home in just a couple weeks on the line, to say we placed our life at the foot of the cross is no exaggeration. My husband looked at me and our eyes welled up with all the possibilities.  Our doctor is a holy man whose eyes glistened with joy every time he lifted one of my babies into the air. We were in good hands.

My children do not treat each other any differently than they treat others. Occasionally I will even hear an incredulous, “Just because Gabe and Liz have arthrogryposis doesn’t mean they don’t have to do the dishes.” We have raised our children with the notion that everyone has some type of disability; some you see, some you don’t. We all have struggles. I pray that they all have eyes and hearts open to see life through this lens.

The “how do you do it?” or the “you must be a saint.” comments no longer shake me. They make me smile. The reality is having many children doesn’t make me better than any other mother. Each child in our family has always been spoken of as an addition of more love. Love doesn’t divide. Love multiples exponentially. I know that my marriage has been blessed by the love of these sons and daughters, but more so I know that their hearts have been formed closer to one another through this shared journey. Based on their everyday fiats, they are well on their way to becoming better humans.

Other Places You’ll Find Me