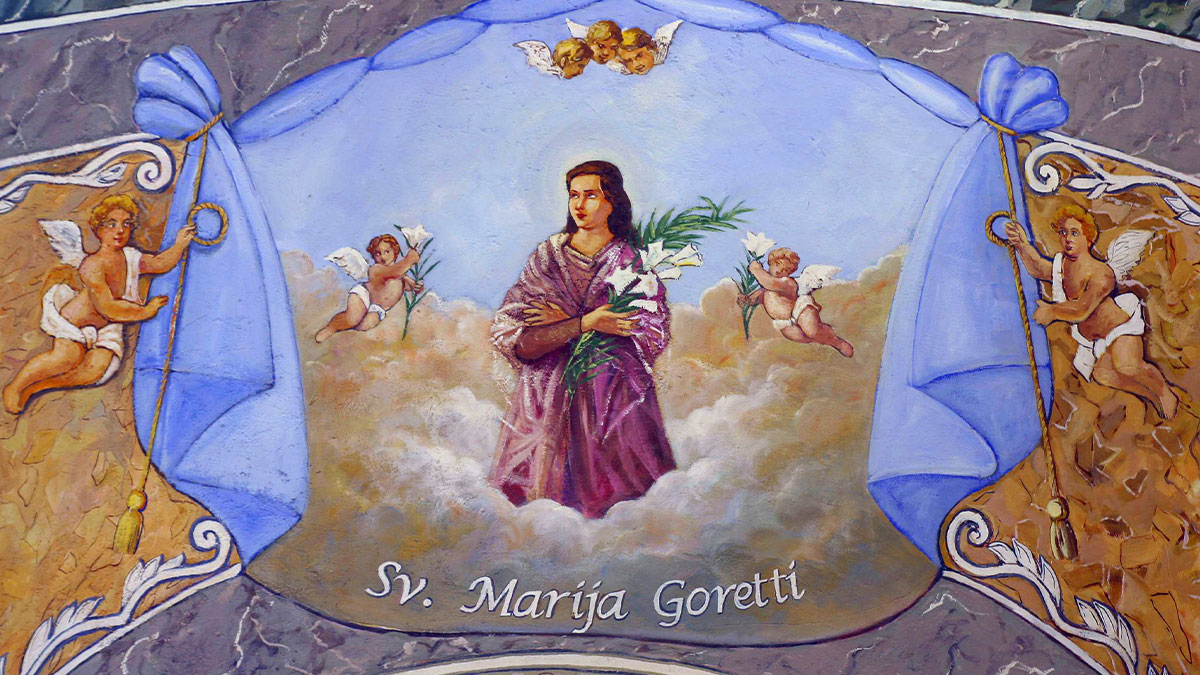 A frequently quoted mantra in our home is that your story starts and ends with mercy. It is written on the white board that holds family announcements. It is brought out when mistakes are made, feelings are hurt and we desire to make amends with ourselves, those we’ve hurt, and especially with the Lord. Mercy is lived out in our home in very tangible ways. Without mercy, there can be no love, for we are all flawed as humans, and breathing mercy allows us continually begin again on our path to heaven.

How blessed we are to be part of a Church that preaches and lives a Gospel message of mercy; a Church which lifts up those within the Church as models and companions with whom we should strive to know more fully.  In a society where role models are frequently found from the front cover of a supermarket magazine, it is heartening to see the story of Maria Goretti shared and spoken of by so many of our youth. She is a relatively new saint in the church and a young one as well. Her virtues of purity, fortitude, and mercy are living examples of the power of forgiveness, and we hold tight to them in our everyday lives bearing witness to the grace that mercy can bring.

Saint Maria Goretti was born into a poor Italian tenant farming family. She had no schooling and no ability to read or write. Her family shared a home with another family after the death of her father. She was at the age of twelve when one of the older sons came into the home and attacked her. Though she fought this attack, she also continually reminded the young man, Alessandro Serenelli, that this was a mortal sin and would send him to hell for his actions. She was stabbed repeatedly and died shortly after. Upon her deathbed, she forgave her attacker.

Serenelli was sentenced to thirty years in jail. While in jail, he received a vision of Maria in a dream, bringing him flowers, one for each wound he had inflicted upon her. From that point on, his life began a new course and his first act after being released from prison after 27 years was to go to Maria’s mother and beg forgiveness.

Devotion to this small but faithful martyr grew, and in less than half a century, on June 24, 1950, Maria Goretti was declared a saint. Her mother, sisters, and brother attended her canonization, along with her attacker Alessandro, who had joined the Capuchin friars.

Allowing ourselves to walk with Maria Goretti is akin to the hard task of learning to love Jesus like a child. In her, we see a strong and pure desire to love and serve the Lord. She is not a saint who was well catechized. She could not quote Scripture. Her witness of purity and mercy is simple and fervent. Reading her story, one can feel this, as from her deathbed she desires to be in heaven one day with her attacker. She pleads for him from heaven, teaching us that prayers go beyond death; that God can make all things new. Her mercy gives us courage to forgive the deepest wounds against us or our family and to trust that mercy can heal and redeem.

In Maria Goretti, we have a beautiful saint to whom especially our youth, but all of us as well, may seek intercession for pure hearts and minds. We also receive the gift of a saint whose life began and ended with mercy. Saint Maria Goretti, pray for us.

Saint Maria Goretti’s feast day is July 6. She is the patron saint of purity, victims of sexual assault, young girls, and mercy.

This article first appeared at CatholicMom.com

Other Places You'll Find Me